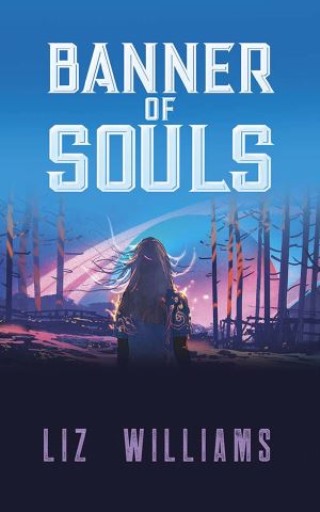 In the distant future, Earth is dominated by a Martian matriarchy known as the Grandmothers. Males are virtually unknown, and reproduction is a matter of industry. These experts in genetic engineering have bred a messiah, Lunae, who can bend time to her will. But when killers from a rival planet are dispatched to destroy her, the Grandmothers order a Martian warrior, Dreams-of-War, to protect the young savior. Dreams-of-War's guardianship leads to powerful revelations—not only the mystery behind Lunae's true purpose and the reason she's being stalked by assassins, but also the long-forgotten secrets of humanity's first contact with aliens.
An atmospheric blend of fantasy and science fiction, Banner of Souls was shortlisted for the Arthur C. Clarke Award. Publishers Weekly declared Liz Williams "an author to watch," and Booklist observed that "the world Williams has created is endowed with great depth and a satisfyingly inventive history."

Liz Williams:
British science-fiction author Liz Williams has a PhD in Philosophy of Science from Cambridge University. Her first two novels, The Ghost Sister and Empire of Bones, were nominated for the Philip K. Dick Award, and several of her books have appeared on the New York Times "Best of Year" listings. Banner of Souls was shortlisted for the Arthur C. Clarke Award in 2006.